6 Types of video microphones and their use in practice

This type of microphone is commonly used by attaching it to a video device such as a DLSR camera, and because it has special damping, it does not transmit vibrations to the recorded audio. These vibrations are generated in the camera (when focusing, zooming) or when the camera moves. 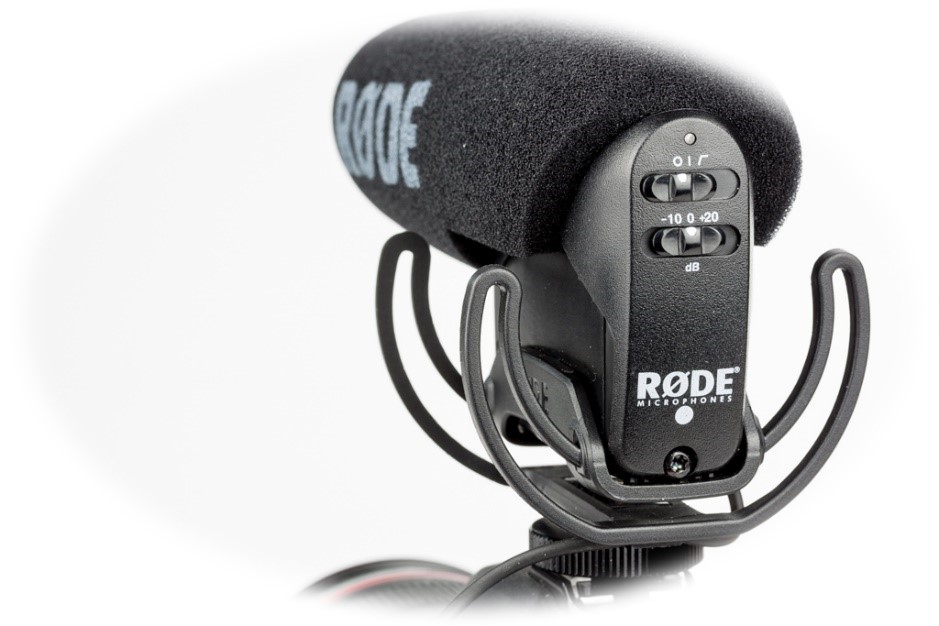 In addition, thanks to the ability of some models to amplify the sound up to +20dB, you can reduce the volume of the camera's internal amplifier to -12dB for better sound without noise, and if the microphone includes a -10dB attenuation cell, you can record even very loud sound sources such as musical performances. The above features are of course not available in cheaper types of video microphones such as the Rode VideoMic GO or other equivalents.

This type of microphone is suitable for a camera that moves when you are shooting a Vlog, a trip with friends, or a musical performance, etc.

However, these microphones can be just as good when used on a stand. You can place the microphone on a stand out of the shot, or entrust it to a microphone technician who will have it on a pole, or you can have this microphone in the studio directly on camera, but it is important that the microphone is no more than 60 cm away from you, then you can hear a lot of echo in the room or the sound is without dynamics.

So a video microphone has many uses, until you think it's good for everything, but it's not. It can be placed on a stand, but to get sound out of this microphone from a greater distance from the camera, you need a very well shielded cable because the microphone doesn't have a symmetrical output and therefore different sounds can be packed onto the cable. This microphone is also quite heavy. You need to change the batteries occasionally, it's not waterproof and so on, but it's not made for a pole or studio operator. There are other microphones for that, such as shotgun microphones with a cancellation tube or cardioid to hypercardioid pencil microphones, but we'll talk about those later, now comes the lavalier microphones.

Lavaliel microphones: are probably the most famous microphones for video recording, you can meet them almost everywhere, because you just need to pin this microphone on your clothes, attach it somewhere, etc.

In the heavy majority of cases, you will encounter an omnidirectional variant, such as the DPA 4060 or the Sennheiser MEII. The omnidirectional microphone is mostly used because it can be placed in any direction, for example upside down, and still pick up sound nicely, it is also more resistant to touch and very easy to hide as it can be made in very small sizes..

A directional lavaliel microphone like the DPA 4080 is used when shooting in a room with a lot of echo that you need to eliminate. They are also often used by sound engineers on stage because they are more resistant to feedback and also better at eliminating ambient noise. Unfortunately, because they are directional, you have to place them towards your mouth and they are also quite large and don't hide much.

Everyone starts with a lavaliel microphone, whether directional or omnidirectional, because it can be bought for a few euro and connected directly to a DSLR, mirrorless camera, mobile phone or even a large camera if you have the right type and accessories.

After a while though, you'll find that every time you look at yourself, there's some big black unsightly thing in the recorded video, and you'll also find that if you have a plain t-shirt, there's nowhere to put the microphone. 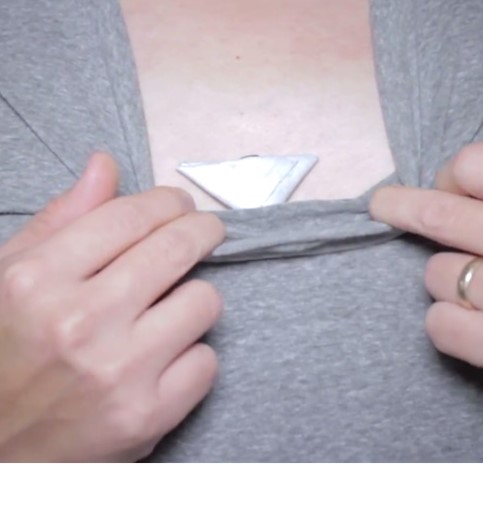 The solution may be to purchase another professional small lavaliel microphone that is not so visible, and even such a small microphone can be hidden under a t-shirt or elsewhere using the right technique, which is especially useful for filmmakers or those who want to have a video where the microphone is not visible.

A TIP to get you started is: If you're recording or planning to record in a studio where you won't be moving in front of the camera, get an Audio-Technica AT 2031 or Rode VideoMic Pro cardioid pencil microphone to place on a stand just above your head out of the shot, plus a Saramonic SmartRig+ universal amplifier to connect the microphone directly to your camera, recording device or phone, and of course buy some cables and a stand. This one will save you a lot of time, you won't have a microphone hanging out anywhere and it just looks the best. 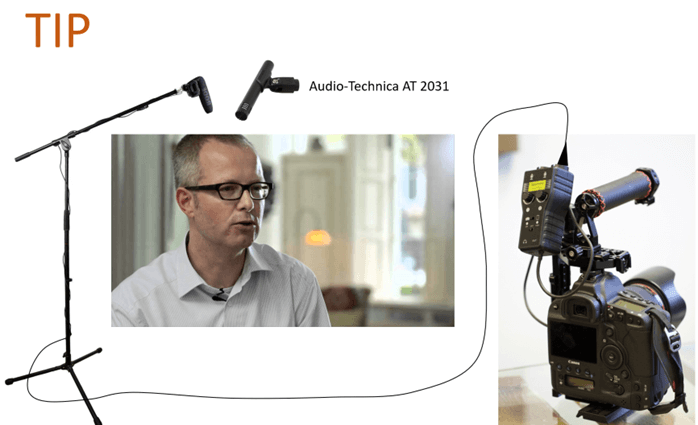 You may be thinking, why use pencil microphones? They're called that because they look like a pencil, are thin, short, have a smaller diaphragm than traditional studio microphones, and are made for a variety of uses, from capturing the voice inside to capturing musical instruments of all kinds.

Pencil microphone is especially suitable for indoor VIDEO recording, very good microphones are for example Audio Technica AT4053b, Audix SCX1HC, Neuman KM185, Oktava MK-012 and many others. These microphones are again condenser only and for our purposes are used with a directional characteristic of cardioid to hypercardioid.

Pencil microphones with a cardioid characteristic are suitable for an equipped office room, studio or living room etc. in most cases the pencil microphone is held out of the shot, just above the head to be as close as possible but not visible in the shot. This is useful for filming dialogue indoors. 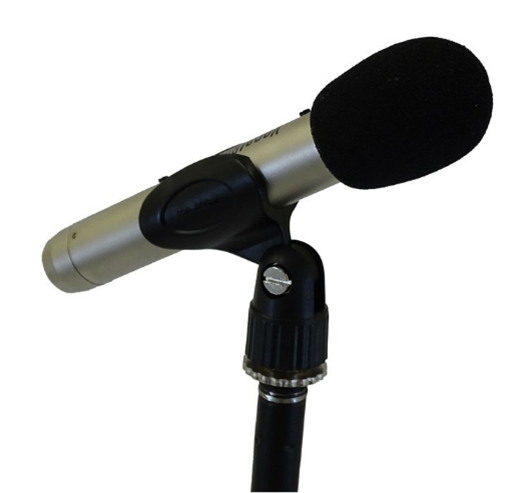 Such a suitable small-diaphragm cardioid condenser microphone can be the VBM-90 directly from our company VocalBoothToGo.

This microphone was designed primarily for voice capture during VoiceOver recording and will be used especially by people who travel frequently and use or would like to use portable vocal booth VOMO, which is convenient because it is small, but can also be used in a home studio or on a microphone arm on a table.

More details about the microphone can be found directly on this page: click here.

Shotgun microphones are microphones that use a so-called interference tube. It is basically a pencil microphone to which this tube has been added, and thanks to this element, the directional characteristic of the microphone narrows significantly and the microphone subsequently picks up sound mainly from the front. 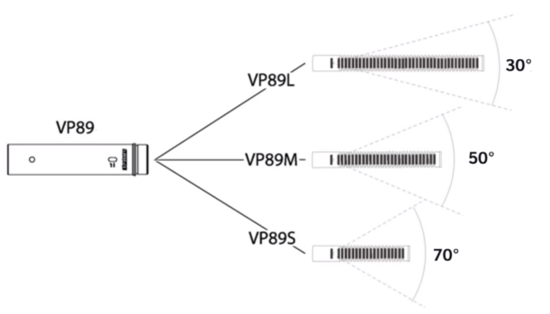 Then it depends on how long the tube is, the longer it is so the more directional the microphone is, it picks up a lower angle and better eliminates sounds that are not coming from the front of the microphone.

However, if you want to be 100 % sure it is better for small spaces with a lot of echo to use pencil small-diaphragm microphones with a super or hyper-cardioid directional characteristic, such as the Audio Technica AT4053b, and use a shotgun microphone outside, such as on the Sennheiser MKH 416. 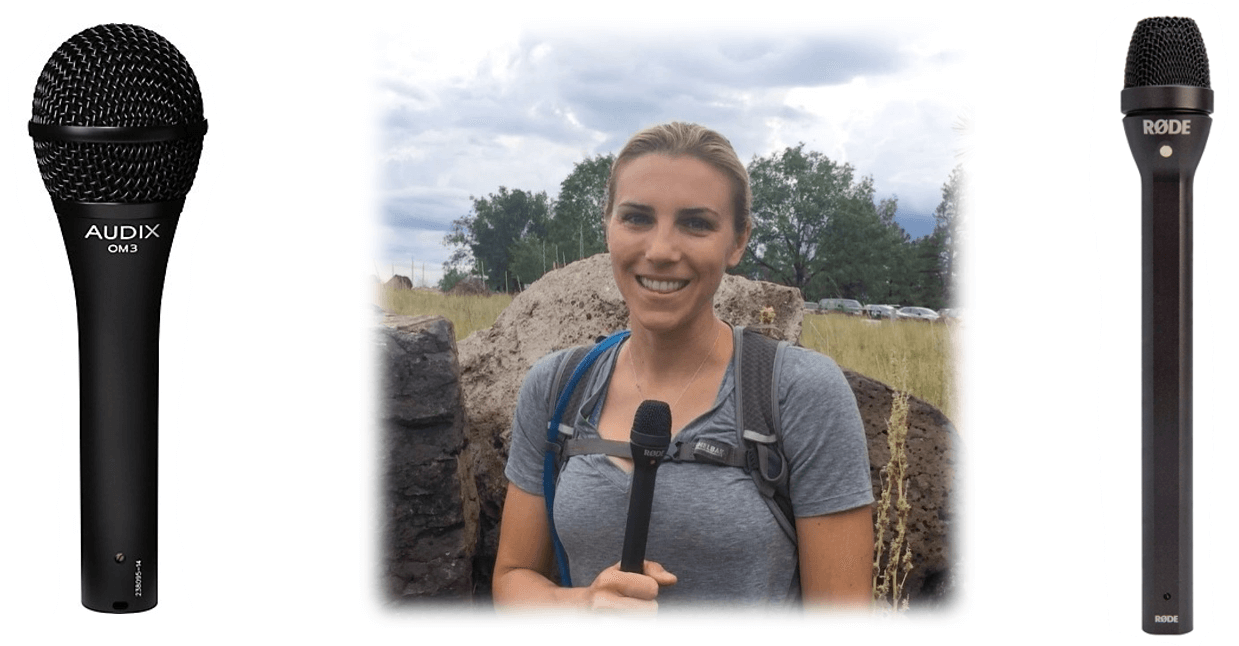 Both types of reporter dynamic microphones (omnidirectional/cardioid) do not need any voltage to operate, just plug them in and they will work, but unfortunately dynamic microphones have only a very weak signal and you need to use a strong preamplifier to amplify this signal.You can do this, for example, with a Sara amplifier.

Saramonic Smart Rig+ which is suitable for mobile phones and cameras, or if you have a large camera with XLR input, it should have a strong enough preamplifier. Alternatively, you can use a wireless audio transmission system that has its own preamplifiers.

So where we could use the omnidirectional and where to use the cardioid reporter's DYNAMIC microphone?

Directional (cardioid) microphones like the Sennheiser e-835 are microphones that are designed more for singing, they have a short handle and are very insensitive and very directional, so you have to speak into them accurately and when you're doing an interview you have to be very careful that the microphone is in the right place, on the other hand thanks to this you can use a directional handheld microphone even in very noisy environments, but these microphones are not very windproof without additional protection.

But there are exceptions, such as the Sennheiser MD 46, which is directional but has been made to have the best features for reportage work. It's more windproof thanks to thicker foam, touch resistant and has a long handle so it's easier to hold, unfortunately it doesn't have a smokeless magnet so it's not as sensitive as the RE 50 N/D-B but if you need a directional reporter microphone with an XLR connector more suited to noisier environments the MD 46 is the obvious choice.

This type of microphone comes in condenser or dynamic designs and can be seen exclusively in the studio to complement video. They are also used in radio, or for recording computer desktops, webinars or commenting on games, in a word they are used on VoiceOver.

The microphones that are used are dynamic microphones such as Shure SM7b, Electro-Voice RE20, Heil Sound PR 40.

The most important thing to note with this microphone is that the dynamic microphone for VoiceOver is very low sensitivity and this is because it can speak into it from very close proximity which makes it suitable for very noisy environments, and therefore you can record very high quality sound even in a room where the acoustics are not well designed, by example by acoustic blankets or if the studio is next to a noisier street, you'll still be perfectly audible and there won't be any distracting noises in the background, provided of course that you have a microphone right next to your mouth and speak loud enough.

You should choose this for VoiceOver when you want the best natural sound quality, a bit of freedom and to be further away from the microphone, this is useful when you are recording audio books, ADR, coaxing cartoon characters out of a monitor, webinars or something similar, but here you have to be careful as the large diaphragm condenser VoiceOver microphone is very sensitive and not very directional, so it will not only pick up your voice, but also the room acoustics and most of the surrounding louder sounds, so it's good to be as quiet as possible when recording with such a microphone, also the room must not have too much echo like a half empty office which can be solved by acoustic blankets or you might as well lock yourself into acoustic vocal booth. Most people probably don't like having their face stuck to the microphone, which is why very sensitive condenser large diaphragm microphones are available, but it takes its toll.

Voice Over and microphones in general:

Also remember that good room acoustics are very important for VoiceOver, you can use for this acoustic blankets or completely shut it down for some acoustic vocal booths.

If you're after complete soundproofing, there are also sound proof booth.

And if you like to travel and want to record you can use the travel version VOMO portable booth.